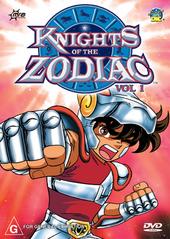 Unavailable
Sorry, this product is not currently available to order
KNIGHTS OF THE ZODIAC is a fast-paced, futuristic, action, adventure series which pits the forces of good against evil as the Knights of Athena battle the Knights of Ares for control of the sacred Golden Cloth of Sagittarius…and the Word!! Led by Bronze Knight SEIYA, the Knights of Athena draw upon their amazing martial arts skills as well as their mystical powers, each keyed to a different sign of the Zodiac, as they attempt to defeat PHOENIX and his Black Knights, who would do anything to gain the Cloth of Sagittarius. But beyond Phoenix lie even more deadly foes – Silver Knights and Gold Knights, possessing more powers than SEIYA and his comrades can imagine, and controlled by the ultimate force of supernatural evil – Ares, God of War! Seiya and the Bronze Knights must pit themselves in hand-to-hand combat against the most formidable fighters in the universe, as they struggle to return Athena, Goddess of Wisdom, to her rightful throne and assure the peace of the world. As our series begins, SEIYA, a young orphan trained at the Sanctuary in Greece – has come to Tokyo to test his skills in the arena of the Galaxian Wars, run by SIENNA, the daughter of Lord Nobu. He’s battling his way closer to the grand prize – the Golden Cloth of Sagittarius – when PHOENIX, a renegade Bronze Knight, steals the Golden Cloth from the Galaxian Arena, before the very eyes of Sienna, the other combatants, and a huge crowd of onlookers. Sienna asks four of her Bronze Knights to go after Phoenix and his band of outlaw knights and retrieve the sacred cloth before the power crazed Phoenix learns how to use its mystical forces. SEIYA, SWAN, DRAGON and ANDROMEDA answer her call. The Bronze Knights must fight and defeat every one of Ares’ army of Silver and Gold Knights, each of whom can draw upon forces in the universe which Seiya and his friends don’t even know exist! Theirs is an uphill battle – a martial arts David/Goliath struggle of good against evil, with the fate of the world hanging in the balance. EPISODES: A NEW ERA OF HEROIC LEGENDS Young Seiya defeats the massive Cassios to win the Cloth of Pegasus and become a Bronze Knight, but has to fight his way past vindictive Silver Knight Shina in order to get out of Greece alive! BURN! METEOR PUNCH OF PEGASUS! In exchange for Princess Sienna’s help in finding his long lost sister, Seiya agrees to fight in Sienna’s tournament of Bronze Knights. His first opponent is Geki, Bronze Saint of Bear! SWAN, WARRIOR OF THE ICE FIELD Hyoga, the Bronze Knight Swan, returns to Japan to fight in Galaxian Wars from his frozen home in Siberia, and battles Hydra Ichi, who matches his poisonous talons against Hyoga’s mastery of ice and snow. DRAGON'S INVINCIBLE FIST AND SHIELD The most furious battle of the tournament begins when Seiya fights Shiryu, Knight of the Dragon, who proves to be a formidable foe with his unbreakable shield and his Rising Dragon Attack.
Release date Australia
August 11th, 2005
Movie Format
DVD Region
Edition
Aspect Ratio
Language
English
Length (Minutes)
90
Studio
MRA Entertainment
Original Release Year
1986
UPC
9316797419194
Product ID
1472208