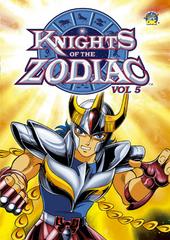 Unavailable
Sorry, this product is not currently available to order
KNIGHTS OF THE ZODIAC is a fast-paced, futuristic, action, adventure series which pits the forces of good against evil as the Knights of Athena battle the Knights of Ares for control of the sacred Golden Cloth of Sagittarius…and the Word!! Led by Bronze Knight SEIYA, the Knights of Athena draw upon their amazing martial arts skills as well as their mystical powers, each keyed to a different sign of the Zodiac, as they attempt to defeat PHOENIX and his Black Knights, who would do anything to gain the Cloth of Sagittarius. EPISODES PHOENIX’S SECRET REVEALED Ikki tries one last time to renew his attack, but a final punch from Seiya downs him. Ikki tells in a flashback of his horrible life on the Island of Doom. His trainer was cruel, beating him terribly in an effort to teach him to hate. But the man had a lovely daughter named Esmeralda, and she and Ikki planned to run away together. One day, during a battle with his trainer, Esmeralda appeared and got in the way of her fathers fists. Seeing her hurt drove Ikki crazy, and he finally learned to hate as his trainer wanted him to. The Phoenix cloth assembled itself onto his body, and Ikki was now Phoenix. Esmeralda and her father went away and he never knew where. The hatred he learned then has stayed with him to this day. Ikki’s flashback is interrupted by the appearance of a giant Docrates, and his soldiers, who want the gold cloth. During the battle, great fissures appear in the earth. Ikki falls into one, but Shun saves him. Ikki’s inner goodness is restored by this act, and he comes to the Bronze Knights aid. A landslide seems to bury Docrates as well as Ikki. Docrates’s men get away with most of the gold cloth. The Bronze Knights escape with only the helmet. DOCRATES FIERCE ATTACK In the Sanctuary, the main training camp in Greece, the new master plots evil. Marin and Shina fight because Shina is still furious that Seiya won the Pegasus cloth over Cassios. Back at Sienna’s mansion, the Bronze Knights are discussing how to regain the rest of the gold cloth, when Kiki appears, playing a telekinetic prank on Tatsumi. The next morning, Docrates appears, having dug his way out of the landslide. Docrates beats up the knights and kidnaps Sienna, saying he’ll exchange her for the gold helmet SAVE SIENNA! Docrates takes Sienna and Tatsumi hostage. Back at the Sanctuary, the one-eyed, toady Gigas gives the Master an update on Docrates’s progress. At Sienna’s mansion, Kiki has used his mental powers to discover where the rest of the gold cloth is hidden, he and Shiryu head after it, while the other three go to exchange the helmet for Sienna and Tatsumi. After much fighting, Hyoga uses a special technique to freeze Docrates feet and legs, allowing all three knights to defeat him. They still have the gold helmet, as well as Sienna and Tatsumi. Shiryu and Kiki reach their destination in time to see an enemy helicopter leave with the rest of the gold cloth.
Release date Australia
December 5th, 2005
Movie Format
DVD Region
Edition
Aspect Ratio
Language
English
Length (Minutes)
68
Studio
MRA Entertainment
Supported Audio
Original Release Year
1989
UPC
9316797419330
Product ID
1476700