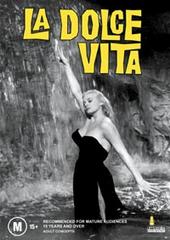 Unavailable
Sorry, this product is not currently available to order
Marcello (Marcello Mastroianni) is a young playboy and jaded journalist who spends his days between celebrities and rich people, seeking ephemeral joy in parties and sex. When a famous film star comes to Rome, he does everything he can to meet her, and when he does, he is totally charmed by her.

Famous for coining the word 'Paparazzo' after one of its characters, this is one of Fellini's best films and made its title synoymous with the exuberant and decadent lifestyle of an era.

"At three brief hours, La Dolce Vita, a piece of cynical, engrossing social commentary, stands as Federico Fellini's timeless masterpiece. A rich, detailed panorama of Rome's modern decadence and sophisticated immorality, the film is episodic in structure but held tightly in focus by the wandering protagonist through whom we witness the sordid action. Marcello Rubini (extraordinarily played by Marcello Mastroianni) is a tabloid reporter trapped in a shallow high-society existence. A man of paradoxical emotional juxtapositions (cool but tortured, sexy but impotent), he dreams about writing something important but remains seduced by the money and prestige that accompany his shallow position. He romanticizes finding true love but acts unfazed upon finding that his girlfriend has taken an overdose of sleeping pills. Instead, he engages in an ménage à trois, then frolics in a fountain with a giggling American starlet (bombshell Anita Ekberg), and in the film's unforgettably inspired finale, attends a wild orgy that ends, symbolically, with its participants finding a rotting sea animal while wandering the beach at dawn. Fellini saw his film as life affirming (thus its title, The Sweet Life), but it's impossible to take him seriously. While Mastroianni drifts from one worldly pleasure to another, be it sex, drink, glamorous parties, or rich foods, they are presented, through his detached eyes, are merely momentary distractions. His existence, an endless series of wild evenings and lonely mornings, is ultimately soulless and facile. Because he lacks the courage to change, Mastroianni is left with no alternative but to wearily accept and enjoy this "sweet" life." --Dave McCoy
Re-released on
July 1st, 2008
Movie Format
DVD Region
Edition
Aspect Ratio
Director
Federico Fellini
Language
Italian
Length (Minutes)
167
Stars
Studio
Vendetta
Subtitles
English
Supported Audio
Original Release Year
1960
UPC
9322225035386
Product ID
1472742