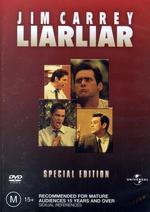 Jim Carrey is hysterically funny as a lawyer who finds out he can't lie for a day. His maniacal sense of humour is what keeps this film going and the outtakes during the credits are hilarious too. A brilliant comedy.

Would I lie to you?

Fletcher Reede is a fast-talking attorney and habitual liar. When his son Max blows out the candle on his birthday cake, he has just one wish – that his dad will stop lying for 24 hours. When Max\'s wish miraculously comes true, Fletcher discovers that his biggest asset – his mouth – has suddenly become his biggest liability! Hilarious havoc ensues as Fletcher tries to keep his practice afloat and his ex-wife Audrey from taking their son and moving to Boston.