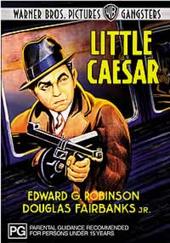 R-I-C-O, Little Caesar, that's who! Edward G. Robinson bellowed into the phone. And Hollywood got the message: 37 year old Robinson, not gifted with matinee-idol looks, was nonetheless a first-class star and moviegoers hailed the hard-hitting social consciousness dramas that became the Depression-era mainstay of Warner Bros. Little Caesar is the tale of pugnacious Caesar Enrico Bandello, a hoodlum with a Chicago-sized chip on his shoulder, few attachments, fewer friends and no sense of underworld diplomacy. And Robinson – a genteel art collector who disdained guns (in the movie, his eyelids were taped to keep them from blinking when he fired a pistol) – was forever associated with the screen's archetypal gangster.