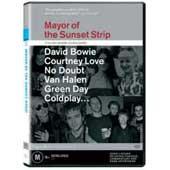 Unavailable
Sorry, this product is not currently available to order
Spanning three decades of music from the Beatles to Bowie, Courtney Love to Coldplay, Mayor of the Sunset Strip is the story of US radio DJ Rodney Bingenheimer's pursuit of fame. As a teenager motivated by his passion for music and the allure of celebrity, Rodney first hit LA's infamous Sunset Strip during its psychedelic heyday. There he partied with, amongst others, Elvis Presley, John Lennon, The Rolling Stones, Jim Morrison, Led Zeppelin and The Beach Boys. Famous by association, he became rock 'n' roll's most infamous groupie.

Relentless in his pursuit of fame and driven by his love of music, Rodney carved out a name for himself as a promoter, journalist, club owner and pop impresario. More importantly, however, he was instrumental in breaking music across the airwaves in the US. Dubbed the 'Mayor of the Sunset Strip' by actor Sal Mineo, Rodney had the ultimate backstage pass. This insightful, emotional and touching documentary takes us on a rollercoaster ride through his rock 'n' roll lifestyle as Rodney pursues his passion, discovering talent, breaking new bands and spinning records for internationally renowned US alternative radio station KR0Q.