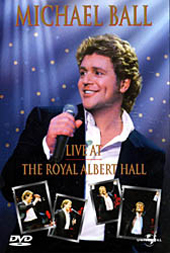 Unavailable
Sorry, this product is not currently available to order
In the midst of his sell out 1999 nationwide tour, for two nights only, Michael Ball brought his unforgettable show to London's legendary Royal Albert Hall. Now you can join Michael on this very special live video as he performs the best from his platinum selling Movies album as well as classic songs from the shows and his own astonishing career. Special Features:
Release date Australia
January 1st, 2003
Movie Format
DVD Region
Edition
Length (Minutes)
111
Actor
Studio
Universal Pictures
Supported Audio
UPC
44007806326
Product ID
1462056