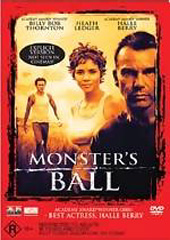 A lifetime of change can happen in a single moment. In the tradition of films like DEAD MAN WALKING and the SHAWSHANK REDEMPTION comes this hard-hitting drama of prison guard Hank Grotowski (Billy Bob Thornton from THE MAN WHO WASN’T THERE, A SIMPLE PLAN) and the life-changing relationship he has with the wife of a man he executed. Australia’s Heath Ledger (from A KNIGHT’S TALE, THE PATRIOT) plays the role of Hank’s son who is desperate to escape his family infested with the bigoted hatred of Hank’s father played by Peter Boyle (from TV’s EVERYBODY LOVES RAYMOND, WHILE YOU WERE SLEEPING). Graphic, explicit and uncompromising, MONSTER’S BALL was nominated for 2 Academy Awards®* and won for Best Actress in a Leading Role – Halle Berry (from SWORDFISH, X-MEN).