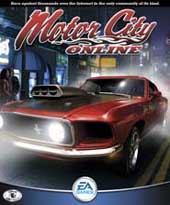 Unavailable
Sorry, this product is not currently available to order
Motor City Online is a revolutionary new online PC title that features a massive online racing and community-building experience for gamers and gearheads alike. Inspired by the golden age of American car culture, Motor City Online allows you to buy, sell, customize, and race classic and muscle cars from the 30's to the early 70's. Whether you build it or buy it - whether it ’s a pieced-together beater or a cherried-out rod - prove yourself in a variety of online racing modes including street, drag and pro tracks.

Motor City Online offers a true user-friendly Internet experience in which players can race competitively (or just for fun) and immerse themselves in the social experience of car clubs, team events, car-collecting and much more. Create unique identities and take up residency in the persistent online community of Motor City, participating in the game’s real-time economy where they spend and earn money by racing, buying, selling, customizing cars, and hiring one another for various services. Grow your inventory of cash, cars and high-performance parts, join a club turf war, chat with fellow car buffs and race your way to a reputation as the baddest rodder in Motor City.

The Cars - Create The Hot Rod Youv'e Been Dreaming Of

Choose from over 60 classic, shoebox, fat fender, muscle and custom cars from the 30's to the early 70's... additional downloads to follow.

Real-world four-point physics for the most realistic experience behind the wheel.

MCO money: earn a weekly salary which can be augmented by winning races, selling services, or simply by your club's success.

24 tracks in four modes including Street Racing on city streets and back roads, pro-style Circuit Racing, Drag Strips for the horsepower-minded, and single Time Trials where it's you against the clock and the leaderboard.

Wager your salary, reputation, or pink slips on badass street tracks, or talk smack during your club racing turf wars.