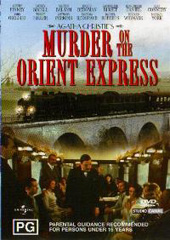 Unavailable
Sorry, this product is not currently available to order
After solving a case, Hercule Poirot takes the Orient Express home. On board is Ratchett, a millionaire and his secretary Hector MacQueen and butler Beddoes. Also there is a Count and Countess, a Colonel, a bossy American woman, an Italian, a Princess and her nurse and Pierre, the conductor. The train gets stuck in the snow and during the night, Ratchett is murdered, stabbed many times. Poirot and Bianchi (the train's detective and friend) investigate and discover that Ratchett and the rest of the passengers are involved in the "Daisy Armstrong" case in which a child was taken for ransom and then horribly killed…