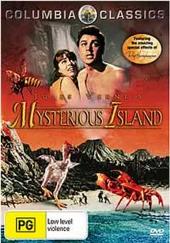 Based on Jules Vern's classic novel, MYSTERIOUS ISLAND is the story of five men escaping from a Confederate prison in an observation balloon. When they land the balloon, they find themselves on a South Seas island where they encounter pirates, a giant bird, a giant crab and even Captain Nemo.