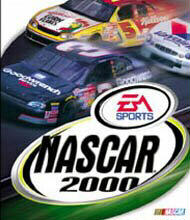 Unavailable
Sorry, this product is not currently available to order
NASCAR 2000 puts you in the driver's seat of your favorite NASCAR ride. Compete for the NASCAR-Championship on 18 official NASCAR sanctioned tracks as any one of 40 current and legendary drivers. Thunder down the straights with 750+ horses under your hood, bump and grind in the corners, and master the nuances of short tracks, superspeedways and road courses to take home the Championship. Thirty three active drivers and cars updated for the 1999 season including Jeff Gordon, Dale Earnhardt, mark Martin, Dale Jarret, Bobby Labonte, John Andretti, Kyle Petty, Adam Petty, Ricky Rudd, Steve Park, and Johnny Benson are all in there. It's the ultimate NASCAR 2000 Trip!