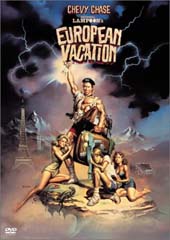 The first time the Griswalds took a trip – in National Lampoon's Vacation – moviegoers everywhere went along for the ride.. and went bonkers! Now they're into even zanier sightseeing in National Lampoon's European Vacation, directed by Amy Heckerling. Chevy Chase and Beverly D'Angelo return as Clark and Ellen, winners of a European tour on which their teenagers Rusty and Audrey join them. Deluxe accomodations… aren't.

Clark tries left-sided English driving, leaving Stonehenge unhinged. In Bavaria a slap-dancing polka turns into a slaphappy free for all. It's holiday road havoc for the Griswalds – and your high road to hilarity!