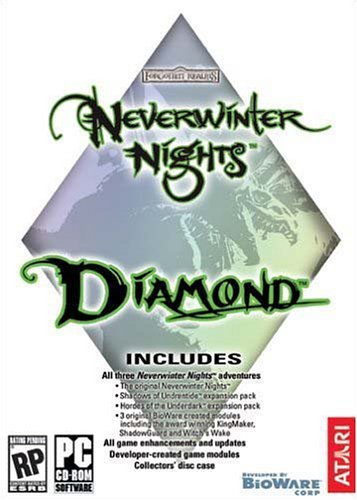 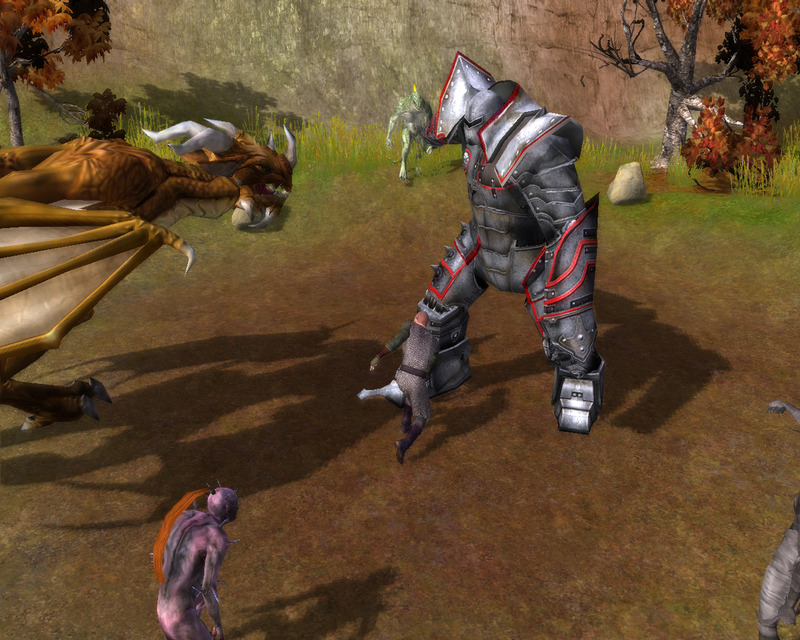 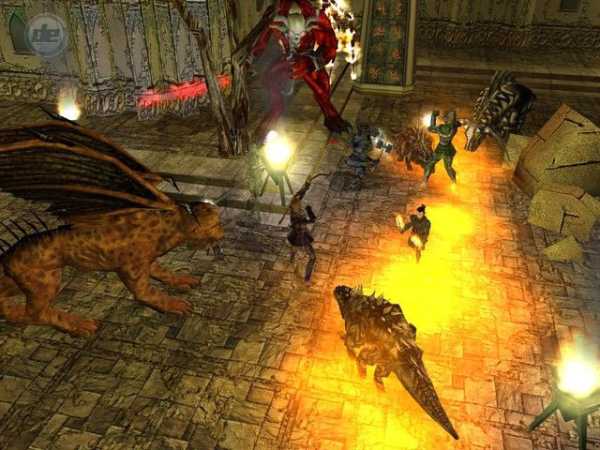 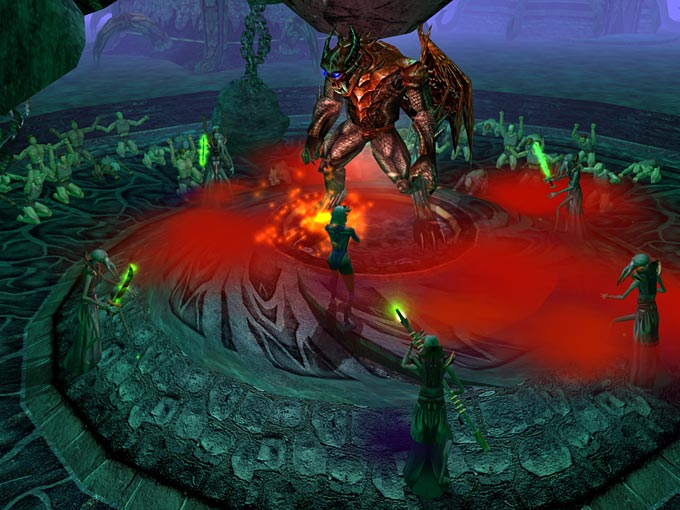 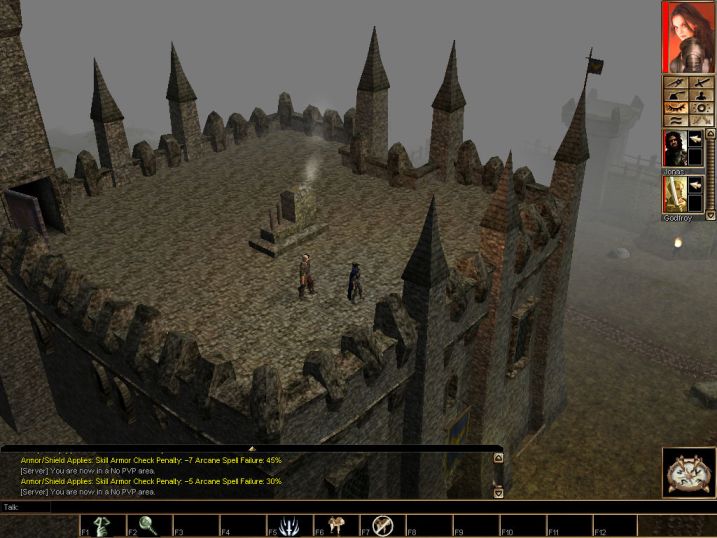 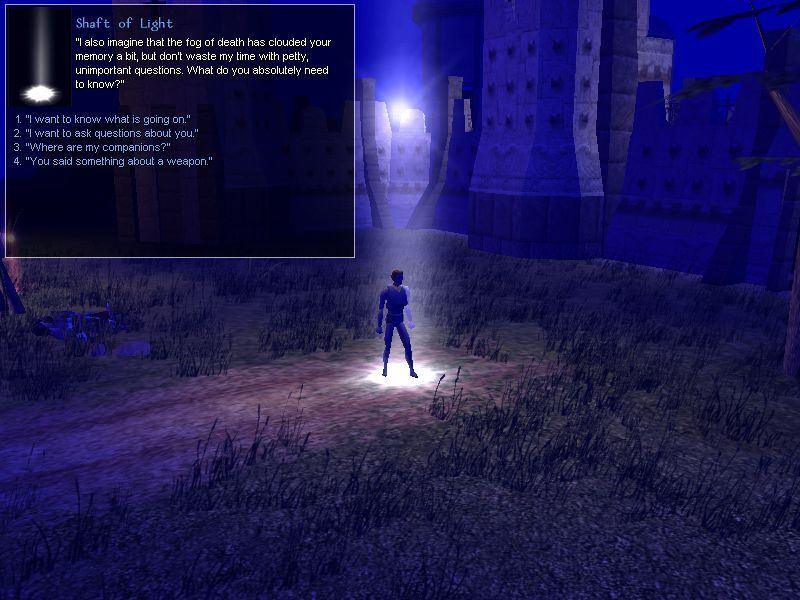 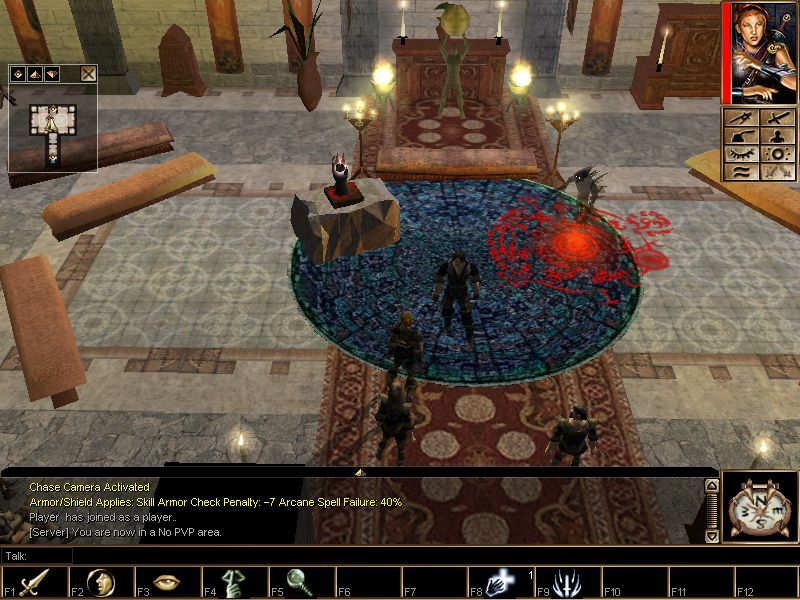 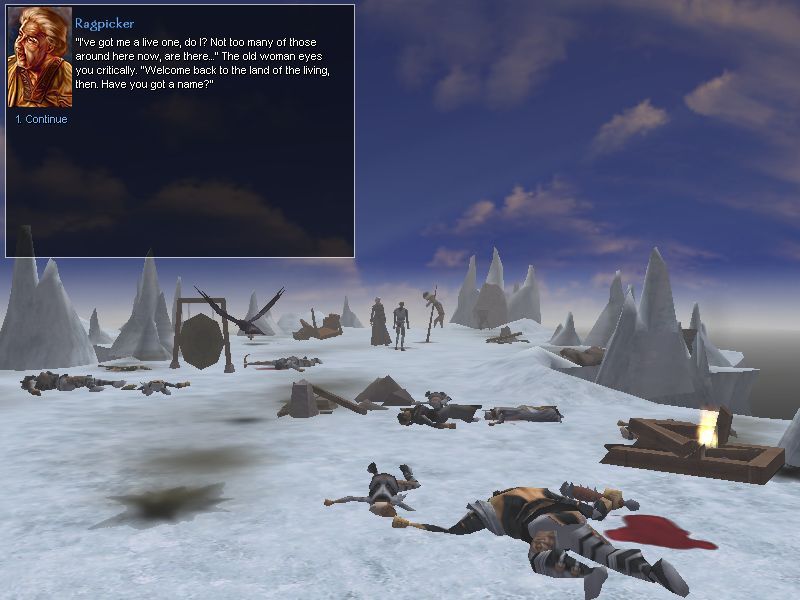 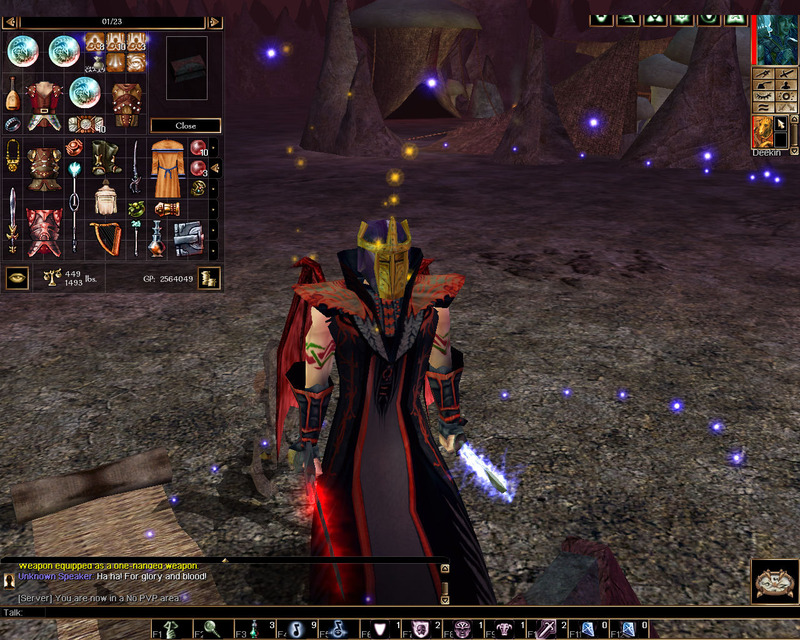 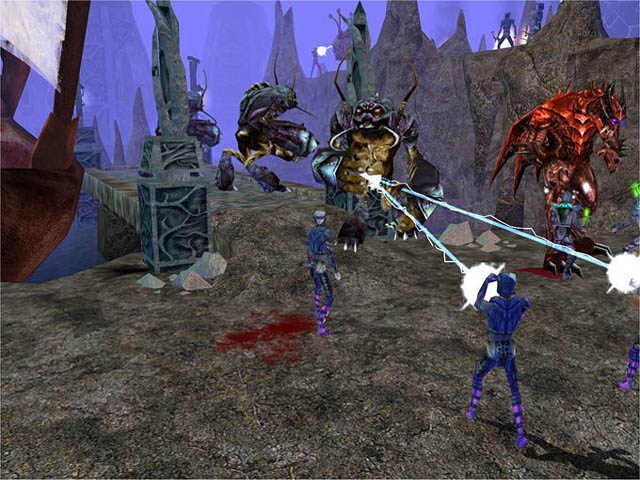 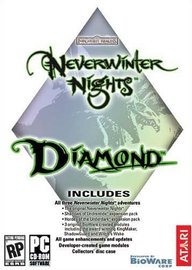 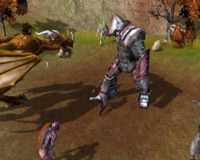 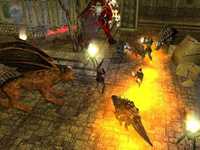 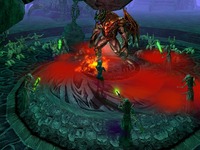 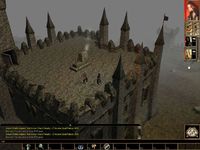 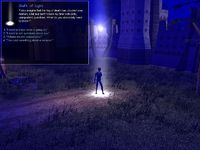 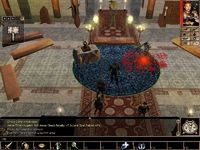 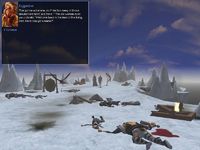 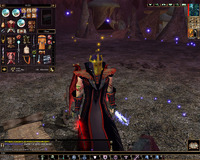 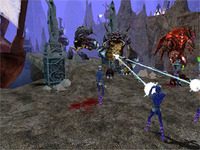 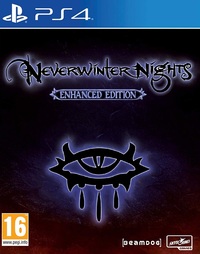 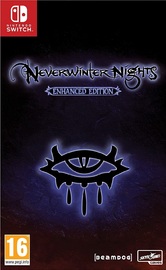 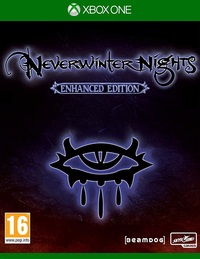 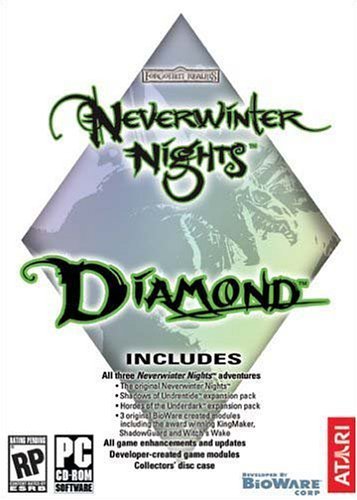 Being a Veteran Neverwinter Nights player, I felt disappointed with the mirror like expansion modules available in the kingmakers expansion pack. I have finished Neverwinter Nights 1 and the two expansions and can reasonably say im aware of 90% of the content available in each module, buying the diamond pack seemed to be the next logical step but I felt cheated with the lack of integrity to the three modules in the kingmakers expansion: Witches Wake, ShadowGuard and Kingmaker.

Kingmaker is an expansion which throws you into the middle of political intrigue as a contender to leadership of the native area, basically you need to make people like you to obtain votes to become leader of the region. The beginning of the module has a fairly impressive build-up in the story and then collapses in on itself as the module was created for ‘lower-end’ characters between 1–5, they recommend making a new character rather then importing one of your own. As the level cap for characters in the diamond compilation is 40 and the lack of any real support for characters that high a level, Kingmaker should have been an intensive module with support for characters of all levels, allowing any kind of player to jump in and have a challenge. In saying that, the Neverwinter Nights game and all modules are supposed to be based on a Dungeons&Dragons based plot and therefore can't be solely based on combat, however with the lack new features of any kind. I can only recommend this game to people who haven't finished Neverwinter Nights, Shadows of Unrentide or Hordes of Underdark. That or if they prefer story based gameplay over the challange.

Neverwinter Nights Diamond is definitely a big let down as I have waited a few years to get it, getting the game with this kind of let down is only another blow for Bioware as the community released modules allow for more depth and even endless gameplay with persistent worlds

Neverwinter Nights is a D&D(Dungerons and Dragons) ruleset based RPG set in the Forgotten Realms. You (the player) create characters from vast sets of race/class/etc always making a new character for a new experience.

With a level cap of 20 in the retail and then a further 20 levels in the expansions. There is nothing your hero can't do, even with the inability to learn every feat available there are seemingly infinite possibilities.

Neverwinter Nights pits you up against the basic ideals and storylines always present in D&D while adding the touch of originality. Guiding your character along the path of Evil, Good or Neutrality against staggering odds and even conspiracy. Fight dragons, Balrogs, Demons, Humans, Elves, Dwarves and more to uncover the truth, further the story or just for the fun of slaughter (if that's your way).

Once you have completed the 3 main modules, then try your hand at the new modules introduced by the Kingmaker expansion set or even buy the official premium modules to further the experience and make the ultimate hero.

Whether you prefer the nimble rogue, the nature loving druid, an abominable dark knight or a paladin of justice. Everything is available to you to create your own story, your own godlike hero.

Create your own maps at will, forging dungeons of impossible odds against whatever and whoever you will. The Aurora toolset will help you in your path to creating the ultimate map.

For those who prefer to control the action as it happens, became the dungeon master using the DM client. Allowing the player to have the advantage of changing the story as they see fit, adding or destroying monster, even laying down more items or anything else you wish. As DM you are the god of the verse.

Neverwinter Nights is singleplayer and multiplayer, for online or network play

Well what do you get with this package you may ask? Well, nothing much, oh except for a brilliant RPG experience, complete with all the expansion packs, an epic story with a wide cast of characters and a genuinely interesting world to explore. This is one of the classics of our time and will be remembered!


Neverwinter Nights is an Advanced Dungeons & Dragons roleplaying game from BioWare, the developers of Baldur's Gate. Neverwinter Nights has not only been designed specifically for the online, multiplayer environment and the latest in 3D technology but it also allows you to experience all the magic of pen-and-paper Dungeon-Mastering on your home computer. Using Neverwinter Nights' powerful and user-friendly Solstice Toolset, you can create and populate entire new modular worlds and stories for others to adventure in. Even better, enter a multiplayer module as a Dungeon Master (DM) and you can alter the plot, possess characters, and manage combat from behind the scenes, all in real-time.

While Neverwinter Nights is a multiplayer online game, this is not the same as a massively multiplayer, persistent online world such as Ultima Online or EverQuest.

Neverwinter Nights has modeled its gameplay on the rich experience of pen-and-paper roleplaying: a small group of adventurers huddling around a table as their Dungeon Master weaves them into a tale of suspense, intrigue, and great daring.


Shadows of Undrentide offers role playing fans even more D&D features than the groundbreaking original. Additions include, new skills, including Tumble and Appraise; new feats, such as Divine Might, Extra Music and Bullheaded; new weapons, such as Holy Water Flasks and Choking Powder; new prestige classes, like Harper Scout; new monsters from the D&D universe, including Medusa, Cockatrice, Sphinx, and Female Fire Giant; and dozens of new spells.

Hordes of the Underdark


Neverwinter Nights: Hordes of the Underdark is the second expansion for the revolutionary role-playing game Neverwinter Nights. BioWare has created a dark and dangerous world of adventure set in the world of Dungeons & Dragons. Your hands are callused from many years of weapon play, your mind is sharp from hundreds of books studied, your feet are nimble from slipping unseen and unheard past thousands of guards and your faith is unshakable in the gods you worship... but will it be enough for this final terror? Will you stand once more for those who cannot? You are the last hope for the Forgotten Realms, you must face the unstoppable, you must decide the fate of all. You are a hero... but are you a legend? Epic levels, new prestige classes, new creatures, spells, feats, weapons and new tilesets to explore... endless adventure!


In a party with a cowardly Wererat, a scarred Nymph, an exiled Rakshasa, and a quick-tempered Azer, you seem to be the only normal one... but are you? Embark on a journey to face your nemesis outside the embattled ramparts of the Keep of Cyan. It is a journey that will test your loyalties and cause you to question the very bounds of life and death. Evil lurks in the war-torn keep and it's up to you to unearth it. To learn the truth, you must win the throne.