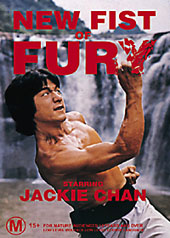 WII. During the fierce fighting between the Japanese and the Chinese, the heroes sometimes came from unusual places. Jackie Chan plays a former pickpocket who is thrust into fighting for his life when his school is destroyed and master savagely murdered.

But even a man of the streets cannot hope to take on the Japanese war machine without an edge. Success comes when his fiance teaches him a new and deadly art (and one never-before revealed on the screen), and together they are able to avenge the death of the master, in a battle of unsurpassed violence and bloodshed.