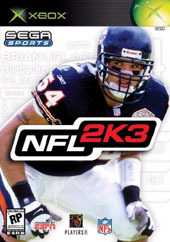 Unavailable
Sorry, this product is not currently available to order
Building upon championship-caliber gameplay and presentation NFL 2K3 raises the bar with new lifelike player animations, convincing play-calling intelligence, an on-the-fly audible system and a brand new ESPN broadcast system with the famous overlays, scores and highlights beloved by all sports fans.

In these days of free agency when championships are won or lost in the front office as well as down on the field, NFL 2K3’s new easy-to-use Franchise mode gives you total team control as player, coach and general manager – track the best players, make the smartest trades and build the most dominant team in the league.

Complete with all of the updated rosters, new NFL re-alignment changes and authentic stadiums redesigned in full 3D for the 2002 season, NFL 2K3 will deliver the most exhilarating football action experience.

All New Franchise Mode – Track comprehensive player stats and make shrewd trades as you build your franchise, while developing your current team and performing on the field each week. An intuitive visual presentation makes being a General Manager easier to navigate than ever before.

Effective Audible System – Call plays just before the snap to catch your opponent off guard. NFL 2K3 eliminates the complexity, making it simple to call a blitz or take advantage of a defensive mismatch.

Gamers have the ability to draft senior college players from SEGA Sports NCAA College Football 2K3, and have them play into the next season on NFL 2K3.

Award-Winning Play-by-Play and Commentary – Announcers deliver insightful commentary based on game situation, historical references, milestones and other factors, and uses visual aides such as a telestrator and dynamic camera angles to illustrate key points.

Redesigned 3D Stadiums – Every NFL stadium is here, authentically reproduced in stunning 3D. From the cheap seats to sidelines crowded with players, coaches and camera crews, no detail is overlooked.