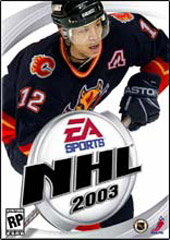 
Game Breaker - Perform dynamic dekes and score goals to build up the Game Breaker meter and once the meter is at 100%, users will find themselves in a zone with a visible advantage in dramatic moments such as one-on-ones. Surroundings move in slow motion, 'On the Ice' sound is more pronounced, intensity increases and plays will be dramatized with cool new replays.

Dynamic Deke Control - Fun and easy user activated dekes enable users to trigger one of eight different moves with the touch of a button, or take complete control in order to create their own dekes.

'On the Ice' Sound -NHL 2003 will feature 'On the Ice' sound captured from actual professional hockey games so users will experience the authentic sounds of a hockey game from ice level, including chatter from the bench, players shouting, and sticks and blades scraping the ice.

EA GameStory 2 - New and improved EA GameStory 2 tracks and highlights player and teams stories throughout the course of an entire season. For example, a player with a hat-trick in a previous game will be under close watch to see if he can repeat his heroics in the next using cinematic camerawork, new replays, overlays, play-by-play, and color commentary.

New Graphics and Animation Engines - With all-new graphics and animation engines, NHL 2003 promises to be the most visually stunning and vibrant NHL game yet.

Improved Goalie AI - Goalies are the most realistic to date, making spectacular saves on breakaways and rebounds, including desperation saves and others.