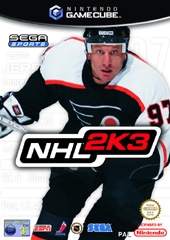 Unavailable
Sorry, this product is not currently available to order
More than just familiar faces and numbers, Sega Sports NHL 2K3 delivers player realism down to size, skill, and behavior, resulting in individuals that exhibit accurate styles of play. Now grinders battle for pucks in the corners, elite players see the ice and create opportunities, and fast skaters exploit their speed. The all-new Franchise Mode lets you capitalize on player accuracy to develop a team that plays your brand of hockey. Now you can draft hotshot rookies, trade for players who compliment your team, compensate for injured players, and more. Then put that precision to work on the ice by anchoring lines with key players and rotating those lines to create the match-ups you want. Bringing it all together is a new ESPN broadcast system where scores, highlights, and more are presented in the network’s famous style, putting NHL 2K3 in prime position for a repeat season as the leader in hockey realism.

All New Franchise Mode -- Create a team and develop it into a dynasty. Play the roles of general manager, coach, scout, player, and more.

Detailed Player Attributes -- Each player is rated in over 50 different categories, resulting in unique players that perform like their real-world counterparts.

Complete Lines Control -- Set and customize lines based upon your own strategy and maintain full control over how and when you cycle them.

Improved Play Execution -- Teammates work together to set up plays and execute strategy. Defense-minded teams may trap the zones, while faster teams tend to play a more wide-open style.

Over 30 Arenas -- All 30 NHL arenas are represented in the game with extras such as a Legends arena and an International ice rink.