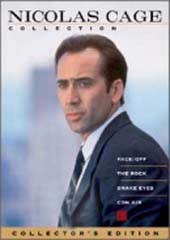 Unavailable
Sorry, this product is not currently available to order
This Nicolas Cage box set contains 4 movies. Face/Off Sean Archer (Travolta) has been chasing Castor Troy (Cage) to avenge his son's death by the hands of the psychotic terrorist for six years. Now that he killed Castor, Sean must find a biological bomb by assuming the identity of Castor Troy by taking his face and being brought in prison. But Troy, who awakes from his coma, takes Archer's face in order to take revenge on him. Now, Troy turns Archer's life upside down by assuming his identity. Will Archer break free from his prison and get his face back, or will Troy have the last laugh? Con Air Cameron Poe, a highly decorated US ranger, is convicted of murder after protecting his wife in a drunken brawl. Finally, after eight years, he's being paroled and going home to his wife and daughter. His ride home: the Jailbird, which is also transporting society's vicious murderers to Feltham Penitentiary, Lousiana's toughest maximum security prison. A surprising escape is made on board the plane as the cons seize control of the plane, and head it towards Las Vegas. The officials on the ground want to blow it out of the sky, but three people know an alternative... US Marshal Vince Larkin, Cameron Poe's wife, and his daughter. The Rock A group of renegade marine commandos seizes a stockpile of chemical weapons and takes over Alcatraz, with 81 tourists as hostages. Their leader, a former highly-decorated U. S. general, demands $100 million to be paid in ransom, as restitution to families of soldiers who died in covert operations and were thereby denied compensation. Otherwise, he is threatening to launch 15 rockets carrying deadly VX nerve gas into the San Francisco Bay area. An elite SEAL team, with support from an FBI chemical warfare expert (Stanley Goodspeed) and a former Alcatraz escapee (John Mason), is assembled to penetrate the terrorists' defenses on Alcatraz and neutralize the rocket threat before time runs out. Snake Eyes An explosive highly entertaining action thriller, Snake Eyes teams hot Academy Award winning actor Nicolas Cage with big-screen favourite Gary Sinise. Cage is an Atlantic City cop who, along with an arena full of spectators at a championship prize-fight, is eyewitness to a political assassination! Determined to quickly solve the crime, he immediately launches an intensive investigation... then learns that a search of answers will only uncover yet more questions in an ever-widening web of conspiracy, intrigue and danger! Master director Brian De Palma (Mission: Impossible, The Untouchables) has combined riveting mystery with heart-stopping excitement to create a suspense-filled hit you don’t want to miss!
Release date Australia
August 1st, 2003
Movie Format
DVD Region
Edition
Aspect Ratio
Language
English
Actor
Studio
Roadshow
Supported Audio
Genres
UPC
9398511889032
Product ID
1459024