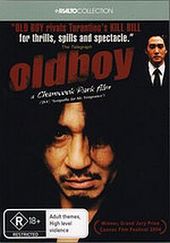 15 Years Of Imprisonment…5 Days Of Revenge

Oh Dae-su is an ordinary Seoul businessman with a wife and little daughter who, after a drunken night on the town, is abducted and locked up in a strange, private “prison.” No one will tell him why he's there and who his jailer is. Over time his fury builds to a single-minded focus of revenge. 15 years later, he is unexpectedly freed, given a new suit, a cell-phone and 5 days to discover the mysterious enemy who had him imprisoned.