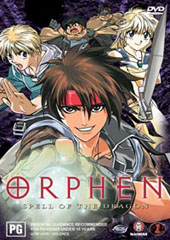 Unavailable
Sorry, this product is not currently available to order
When the most prestigious university of magic in the land loses Orphen, their most talented student, they'll do anything to get him back. Unfortunately for them, Orphen has bigger plans than majoring in spell casting - namely tracking down a mysterious dragon, the Bloody August. Together with his young apprentice, a spoiled heiress, and two cranky trolls, Orphen must battle both the Bloody August and his old teachers, advanced sorcerers who posses frightening power and even more dangerous secrets! Experience the magic, the adventure, and the excitement that spawned the hit video game of the same name. Let ORPHEN cast a spell on your whole family. Don't miss a single adventure.

"The action animation is sensitive, fluid and expressive and there's a glossy, almost sexy â€¦Just light enough to be addictive and serious enough to be interesting." -- Deni Stoner