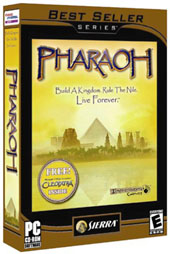 Unavailable
Sorry, this product is not currently available to order
Impressions Games, the creators of the award-winning Caesar III, plunge you farther back in time to the mysterious ancient land of Egypt. Pharaoh is a strategic city-building game set in Egypt roughly 2900 to 700 BC. Grow Egyptian villages into thriving metropolises and watch the economy and inhabitants of this exotic land come to life. Interact with your citizens. Observe their culture and habits. Raise their hopes or raze their homes.

Pharaoh includes many features never seen before in a City Building series game, including a farming model based on the flooding of the Nile, naval warfare, giant monuments that are assembled over time, a unique dynastic progression, and variable difficulty levels. Uses 16-bit color graphics, large maps for seamless gameplay, and a proven interface.