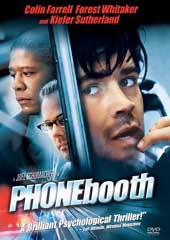 Your life is on the line. What do you do when you hear a ringing public phone? You know it's a wrong number, but instinct forces you to pick it up. Set entirely within and around the confines of a New York City phone booth, Joel Schumacher's Phone Booth follows a slick media consultant (Farrell) who is trapped after being told by a caller a serial killer with a sniper rifle that he'll be shot dead if he hangs up.