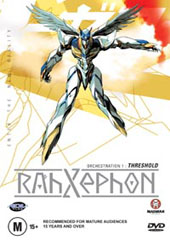 It's got giant robots in it, but it's not a giant robot show. Let's just get that out the way firstly. Sure, there's action a'plenty in it, but this is a show first and foremost about the characters. Everyone may seem easy to stereotype at first, but there's a subtle complexity between everyone and their relationships, which is sorely lacking in other shows.

The character design and artwork is gorgeous, and the opening title song will be annoyingly stuck in your head by the end of this disc.

If there's one gripe i have, it's that the action sequences don't seem quite as clever as the rest of the show (or as in other mecha shows like Evangelion), but it's a small complaint as the rest is so good.

For five episodes, that's value you can't afford to pass up on, for one of the best series released in 2003.

(NOTE: This would be rated higher but I only give 5's to series I've seen all episodes of.)

The city of Tokyo has been overthrown, taken over by the Mu, invaders who have devastated the rest of the planet. Within the domed walls of the city, however, time flows in a different path, and none of the citizens even know they've been conquered. Outside Tokyo, the remnants of the human race have fought a desperate 15-year war against the Mu, knowing only that the key to victory lies within the occupied city. But no one has been able to get into Tokyo—until Ayato Kamina, a young resident fleeing a horrifying attack on the city, unwittingly breaks out. An extraordinary mystery unfolds as Ayato confronts a world he has never known, and begins to learn the horrifying secrets of RahXephon, a humanoid super weapon which apparently only he can control. Features 5 episodes.
Release date Australia
January 1st, 2003
Movie Format
DVD Region
Edition
Brand
Aspect Ratio
Language
English, Japanese
Length (Minutes)
125
Studio
Madman
Subtitles
English
Supported Audio
Genre
Original Release Year
2003
UPC
9322225011618
Product ID
1460244