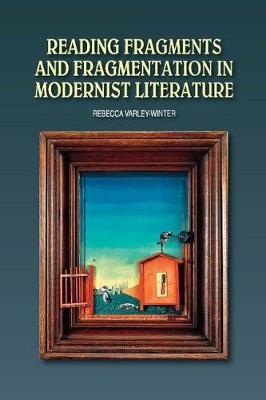 Save $25
Reading Fragments and Fragmentation in Modernist Literature
by Rebecca Varley-Winter ~ Paperback / softback
$88.99
$113.99
In stock with supplier

Due to COVID-19, we're unable to accept new orders at this time. Learn more...
This book begins with the question: How are literary fragments defined as such? As a critical term, fragment is more of a starting-point than a definition: Is part of the manuscript missing? Is it grammatically incomplete, using unfinished sentences? Is it made to look unfinished? Fragment and fragmentation have been used to describe damaged manuscripts; drafts; notes; subverted grammatical structures; the emergence of vers libre from formal verse; texts without linear plots; translations; quotations; and works titled Fragment regardless of how formally complete they might appear. This book offers a phenomenological reading of modernist literary fragments, arguing that fragments create states of conflicted embodiment in which mind and body cannot cleanly separate. Drawing on the concept of aestheticism as an overstimulated body, each chapter connects fragments to experiences of physical and emotional ambiguity, exploring difficulties in speaking, writing and translating; spasms of laughter; and disrupted vision. The author introduces fragmentation as an aspect of what Julia Kristeva and Helene Cixous term ecriture feminine, and offers new readings of the texts that Stephane Mallarme struggled to finish, associating his fragmentation with translation and the Crise (Crisis) of vers libre. The author then considers the fragmentary affects of humour, ranging from Henri Bergson to Mina Loy and T. S. Eliot. Urban fragmentation is explored in Hope Mirrlees Paris: A Poem, John Maynard Keynes The Economic Consequences of the Peace, Felix Feneons Nouvelles en trois lignes, Apollinaires Zone, and Walter Benjamins Arcades Project. The author ultimately weighs the claim of literary fragmentation as an ethical commitment to detail, embedded in the living body, against a view of fragments as more numbed traces or disembodied remnants.

Rebecca Varley-Winter completed her PhD on literary fragments and fragmentation at the University of Cambridge, supervised by Dr Anne Stillman. She has published research articles, essays and reviews in Literary Imagination, The Goose, Cambridge Humanities Review and Glasgow Review of Books. She currently teaches undergraduate students at MiddleburyCMRS and the University of Cambridge; prior to this she was a Stipendiary Lecturer in English at Keble College, University of Oxford. Her poetry has won the Brewer Hall Prize and the T. R. Henn Prize.
Release date Australia
May 15th, 2018
Author
Pages
256
Country of Publication
United Kingdom
Imprint
Sussex Academic Press
Dimensions
165x220x25
ISBN-13
9781845198954
Product ID
26799984