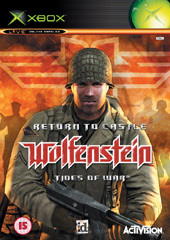 Unavailable
Sorry, this product is not currently available to order
Fusing epic World War II battles with heart-stopping covert operations and tactical combat, Return to Castle Wolfenstein: Tides of War uncovers Hitler's horrific obsession with the occult, living dead, and genetic mutations. As B.J. Blazkowicz, an Army Ranger recruited into the Office of Secret Actions (OSA), players infiltrate deep into the twisted bowels of the Third Reich to battle the unearthly super-soldiers, zombies and mutants forged in the experiments of Heinrich Himmler. With both two player co-op and full Xbox Live and System Link multiplayer support for the ultimate in team warfare, Return to Castle Wolfenstein: Tides of War delivers a frightening and action-packed adventure teeming with shocking paranormal experiments, perverted, flesh-chewing SS weaponry and bone chilling encounters with the Fuhrer's unrelenting henchmen.

Mission - The player assumes the role of B. J. Blazkowicz, a badass Army Ranger tasked with infiltrating the deepest realms of the Third Reich in an attempt to thwart Himmler's occult and genetic experiments. Initially teamed with another OSA operative, Agent One, players begin their journey in Egypt where they uncover the early stages of Himmler's plans. After being grounded by anti-aircraft artillery fire, players must overcome capture and the death of their new partner as they battle throngs of the Fuhrer's brainwashed soldiers and hordes of zombies in an epic campaign, which spans the globe from Egypt to Norway and the heart of Nazi Germany. The game features the most twisted and frightening enemies, including: SS Guards patrolling forests and secret military installations, zombies unleashed in ancient crypts, the mutant X-creatures - the product of the hideous secret X-lab facilities, and the terrifying Occult Priest.

CO-OP Action - The Allies only remaining hope in the battle against the insidious Reich lies in the hands of two men, B. J. Blazkowicz and his new partner Agent One. This Xbox exclusive split-screen co-op mode allows two friends to battle as B. J. Blazkowicz and Agent One through the entire single player campaign.

Multiplayer Warfare - Using Xbox Live or System Link, Return to Castle Wolfenstein: Tides of War multiplayer pits players in a team-based Axis versus Allies contest for front-line domination, where multiple player classes must mobilize and work together to accomplish mission objectives. Styles of play range from Objective mode all the way to a team-based Elimination mode. With battlefields designed specifically for play on the Xbox, players can enlist up to eight versus eight for fast and furious combat. Xbox Live players can invite other players from their buddy list to their game or jump straight into the action using Xbox Live Matchmaking to find a favorite style of gameplay. With the Xbox Live Communicator and full voice masking capabilities, players can verbally coordinate attacks, communicate enemy positions or scream for a medic.

Tactical Combat - Every situation is different and players must survey each potential combat situation and decide how best to approach the combat by either using stealth or overwhelming firepower. With a robust scripting system and life-like AI and animation systems, tactical combat is taken to new levels.
Re-released on
June 7th, 2003
Game Platform
Publisher
Activision
UPC
5030917023828
Product ID
1457344