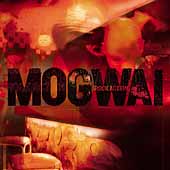 From the opening static surge of "Sine Wave" to the majestic closer "Secret Pint," ROCK ACTION is Mogwai at its best. For this 2001 album, the Scottish post-rock band reigns in much of the bombast of earlier recordings, opting for melody and texture over all else. Guitarist Stuart Braithwaite contributes more vocals than ever before, though they're often hushed or heavily treated, and Super Furry Animals frontman Gruff Rhys lends his voice to the haunting "Dial: Revenge." While the ominous, amped-up "You Don't Know Jesus" is the closest that the record comes to living up to its cheeky title, ROCK ACTION's true highlight is the gorgeously chiming nine-minute mini-epic "2 Rights Make 1 Wrong." Throughout the album, Dave Fridmann's sterling production calls attention to the dynamic arrangements, allowing fascinating sonic elements (including strings and horns) to emerge from Mogwai's three-guitar/bass/drums lineup. For most Mogwai fans, ROCK ACTION stands as one of the band's finest moments, and for newcomers, it's an excellent point of departure.