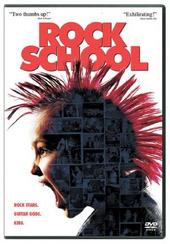 Paul Green, a thirty-something force of nature runs the Philadelphia based Rock School - an after school program for future head bangers aged nine through 17. The joyous and riotously entertaining documentary works on several levels: as a portrait of a dedicated, if highly unorthodox teacher, as a character study featuring several of his students and as a ‘let’s put on
a show’ feature.

Green is no saint. He’s foul- mouthed, prone to temper tantrums and can be downright cruel, but his love of music, teaching and his kids comes through no matter what and despite the abuse he lays on them, it’s obvious they’d walk through fire to be by his side.

If you don't believe there's educational value in Zappa and Zeppelin, Rock School will set you right. Some parents may be horrified by Paul Green, a one-time aspiring rock star and founder of the Rock School in Philadelphia (and later, in cities all over the U.S.), where kids from eight to 18 learn such valuable skills as thrashing guitar, pounding drums, and how to perform like a "Golden God" á la Led Zeppelin's Robert Plant. Not to be confused with Jack Black's character in the 2003 comedy School of Rock, Green embraces old school rock (no hip-hop or Britney wanna-bes here, thank you), and while some may take issue with his belligerent, berating and foul-mouthed treatment of his young students (some musically gifted, others definitely not), it's obvious that Green is on to something, giving aspiring rockers an outlet for educational enthusiasm they might not muster for traditional classroom subjects. Using a digital video camera to gain intimate access to Green and the future rockers of America, filmmaker Don Argott has crafted a funny, alarming, and altogether fascinating documentary that has a lot to say about our national obsession with fame, the curious benefits of Green's peculiar style of teaching, and the undeniable value of encouraging young people to embrace their dreams. For those about to rock…we salute you! --Jeff Shannon