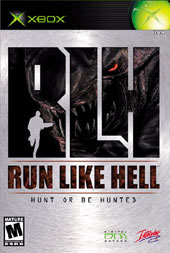 Run Like Hell was originally set for release in Australia last year, but it was pulled from our shelves…with good reason. Somehow though, it got a release here, and one of the most disappointing games of 2003 in the USA is now one of the worst of 2004 in Australia.

It isn't without redeeming features, such as Lance Henriksen (Millennium, Alien) voicing the protagonist and some Xbox Live Downloadable Content updates, as well as a few atmospheric moments.

But it can't save RLH from being a mediocre game with plain graphics, poor controls, and little of interest. It doesn't even seem like the hero runs that fast or well, making a mockery of the title. Even at the RRP of $70 or a bargain-bin price, it's hard to recommend this sub-standard game to anyone at all. It's no wonder Interplay almost went bust.

The player in RLH is exiled military hero Nick Conner who is living out the rest of his military career on a mining space station called the Forsetti. He has a few friends on the space station but it's made bearable due to the fact that his fiancé is on board. He comes back from an ordinary science trip to find the station has been overrun with an alien species. So his goals are to find and rescue as many friendlies as possible (including his love) and get the hell off the station. It's not going to be easy though because the aliens are bio-organic masters. They are not only taking over the ship, but are slowly turning it into a living organism. RLH is an action adventure game in a true 3D environment. Players will have to construct new weapons, set traps and sometimes even use themselves as bait to survive.