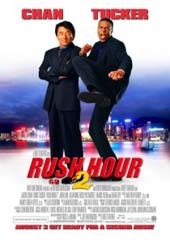 The fastest hands in the East re-teams with the loudest mouth in the West for the most anticipated sequel in an action movie history.

Jackie Chan and Chris Tucker reprise the roles that have made them Hollywood's most popular and hilarious screen partnerships in years, Royal Hong Kong Police Chief Inspector Lee and LAPD detective James Carter share high kicks, low blows, kick-ass action, and a total inability to understand a word the other is saying.