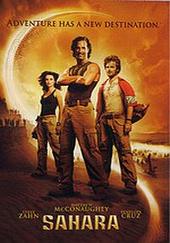 I have watched this movie many times over the years and enjoy it every time. I make my teenagers watch and they love it, especially the ‘Panama’!

Dirk (Matthew McConaughey) and Al (Steve Zahn) have been friends since kindergarten, having also gone through college and the Navy together. The two now work for a former admiral traveling around the world and salvaging treasures from the sea with the National Underwater and Marine Agency (NUMA).

In his spare time, Dirk is obsessed with the 150-year-old mystery of the Texas, an Ironclad battleship that reportedly disappeared from Richmond, Virginia during a Civil War battle and turned up in Africa. When a Confederate coin–allegedly one of only five minted–surfaces in Mali, Dirk and Al plan to travel there from Lagos, Nigeria on the admiral's yacht to investigate.