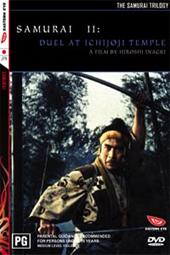 Part two in the Oscar winning Samurai Trilogy sees Musashi Miyamoto mature from a cynical wanderer into one of Japan's finest swordsmen. When Mushashi challenges a fencing school to prove his prowess, he begins to learn that mastery of the sword is also mastery of the self.