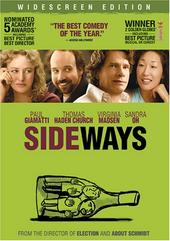 Paul Giamatti and Thomas Haden Church make an odd couple of long-time friends who spend a funny, revealing and sometimes touching time together during a tour of Californias wine country in Sideways, the new film from the director of About Schmidt.

Giamatti plays sad sack, Miles a teacher and aspiring novelist who still has not recovered from his divorce two year earlier. Church is Jack, a washed up actor who is about to be married but, before he takes the plunge, he wants to have a final fling, so when wine connoisseur, Miles takes him on their vineyard visit, Jack intends to enjoy his last taste of freedom" between slurps of Chardonnay  or whatever, because to Jack all wine tastes the same. Although they have been friends since college, the neurotic, unhappy Miles and the easy-going Jack could not be more unalike. Miles envisions a quiet time of wine sipping and golfing; Jack sees their trip as a weeklong party and an opportunity for him to sow a few last wild oats. Because he believes Miles has been officially depressed for, like, two years he is also determined to help his old friend re-discover fun.