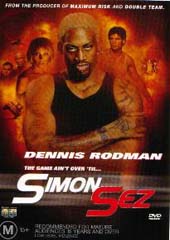 NBA superstar Dennis Rodman is packing heat and looking cool as he takes on the bad guys in this sexy, action-packed adventure, which is set against the backdrop of the beautiful French Riviera.

Interpol agent Simon is working a case against a vicious arms dealer when he runs into Nick, a CIA flunky attempting to deliver a ransom and bring home his clients's daughter. It isn't long before Simon joins Nick in a deadly game of espionage and murder involving the arms dealer, the highpowered fathers of the kidnapped girl and her French boyfriend, and Simon's ex-girlfriend, whose body could be considered a lethal weapon.