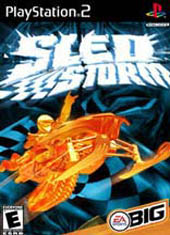 Due to COVID-19, we're unable to accept new orders at this time. Learn more...
EA SPORTS BIG presents a chaotic arcade racer, Sled Storm, inspired by the critically acclaimed PlayStation® title. Developed at Electronic Arts, Canada, Sled Storm builds on the formula that made the Sled Storm franchise so successful. The PlayStation2 version delivers high-impact sled racing through visually stunning and treacherous environments combining the raw power of Sleds and hostile competition. No rules, hidden shortcuts, bone-jarring wipeouts, and huge-air provides a cast of aggressive racers the chance to fight for the finish line. Alternately gamers can go head-to-head, racing against each other in the frenzied split screen racing modes to pay off on the intensity of human to human competition - in Sled Storm.

Game play gets a boost from the dynamic sled suspension animations which allow gamers to read and feel the terrain like never before. Excessive body weight transfer, like showing both feet on one side for throwing their weight into the tightest of corners, audio cues and Dual Shock controller feedback highlight the sheer power of these beasts and highly tuned camera work truly showcase the power of the sleds. Mastery of controllers pays off the most skilled racers in its ability to let the gamer control all aspects of harnessing the sleds' power.

The in-game Sleds are extrapolations on the cutting edge of current Sled technology expanded without the true limits of engineering. Quad sleds have are very stable and have superior traction over the mono-track sled with it's great acceleration and top speed but sacrificed stability. Conventional sleds are strong all around but may sacrifice speed as they are often a little heavier than the modified sleds. All Sleds, unique to individual riders get significantly enhanced throughout the game.

Seven environments offer a broad range of scenery and diverse terrain throughout their global locations. Take on challengers through the excessive inclines and dangerous drops of the snow-capped mountains of Australia or over punishing moguls and through blinding snowstorms on an Iceberg in the Bermuda Triangle. Every course features unique shortcuts, incredibly dynamic scenery and is loaded with a variety of smashable objects.

A painfully competitive cast of racers, each with unique Sleds and their own distinct styles, provides a great breadth of game-play. The seasoned rider, Tracey, brings a futuristic design and experience to the mountain. The 'one to avoid', T.J., brings his sick levels of aggression to the race. The techie, Niklas, delivers quirky yet extremely agile quad tracks to the steepest of challenges.

S.T.O.R.M. boost adds a new dimension to the action by providing increased power, invulnerability and truly terrifying stunts. Players build up their S.T.O.R.M. boost meter by wreaking havoc on the course and smashing objects throughout the tracks. Once the meter is full, racers can then unleash the fury against the opposition.

Numerous 'smashables' throughout all levels range from signs to entire buildings. Besides the visceral thrill from hitting these objects, racers will build up their S.T.O.R.M. meter.

S.T.O.R.M. boost heightens the action and exhilaration at opportune moments as well as improves your chances of trouncing the competition.

'Ease of Play' control, provides added depth for continued learning and extended game-play. Feel the terrain and power with the Sony Analogue Dualshock.

Game goes beyond realism by providing places based in reality but delivered with more imagination. Stunning realism delivered through clear visuals immerses gamers into the experience with all the qualities of a true winter environment

7 unique tracks with extensive hidden shortcuts and alternate routes. The vastness highlights the amount of exploration your are able to do.

Insane tricks combined with racing action allow for great opportunity to show the competition what you really can do as well as scoring points.