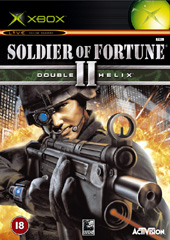 Unavailable
Sorry, this product is not currently available to order
Soldier of FortuneÂ® II: Double Helix for the XboxTM video game system from Microsoft is the explosive follow-up to the acclaimed first-person action game Soldier of Fortune. As John Mullins, a military consultant working for the top-secret agency known as The Shop, players will experience fierce shoot-outs in the jungles of Columbia, the frozen wastelands of Kamchatka and the bustling streets of Hong Kong, to name a few. During their tour of duty, players will have access to an immense arsenal of real-world weaponry including MK 23 US SOCOM, M4 with M203 grenade launcher, MSG90A1 military sniper rifle, and the MM-1 40 mm grenade launcher, as well as authentic next generation small arms such as the OICW weapon system. Armed with this lethal assortment of hardware, players will have to tackle a wide-range of missions, including hostage rescue, intelligence gathering and search-and-destroy. Additionally, players can also encounter up to 10 other warriors in Soldier of Fortune II: Double Helix's multiplayer modes via XboxTM Live.