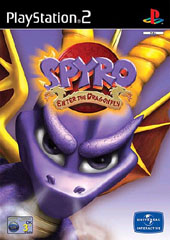 By that i mean, the controls are not very responsive, and there are quite a few glitchs in this game, sometimes i find myself in the middle of a level, with no surroundings, and it takes an age to load.

But after a while, you get used to the non responsive controls, and just learn to put uo with it, also, the levels arnt marked like the previous games, and it is not that user friendly, by that i mean, standing on that rock over there, might take you to a level, about 30 secs later once it has loaded, you find yourself somewhere where youve been before, and then your exiting out, waiting yet another 30 seconds for it to load.

Also the game can get very frustrating, especially fighting the final boss, who dosnt have a health meter !!!!!

But overall, the game plays quite good, with more drivable vehicles, like planes, tanks, etc etc. But this game had to live up to some high expectations, which i have to say it didnt, but its still a good game, and takes a while to get through.

In this all-new adventure Spyro will face his toughest adventure yet. Step in and foil Ripto's evil plan to capture all of the dragonflies in the land and defeat the helpless dragons before it is too late!

Gnasty Gnorc and Ripto are back with a plan to steal the Dragonflies of the Dragon Realm. With help from new and old friends, Spyro must avoid obstacles, jump on platforms, ride vehicles, collect gems, and find a way to return the Dragonflies and restore order to the Dragon Realm. With new powers like electric and bubble breath; new characters; vehicles like tanks, UFOâ€™s, rockets and surfboards; and over 30 levels of unique environments including rainbows, tornadoes, monsoons and snowflakes.