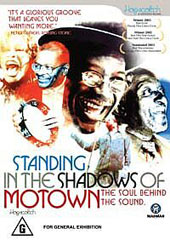 Their music is famous around the world, though their names are not. Known as the Funk Brothers, they put the backbeat and soul into the countless hits of Motown Records. Creating music that helped to define the era of the 1960s, while also remaining a vital influence to this day, these musicians played on more #1 records than The Beatles, The Beach Boys, The Rolling Stones and Elvis combined. Following the Funk Brothers as they return to the sites of their heyday, the film combines exclusive interviews, archival footage, re-enactments, reminiscences, and thrilling new performances. For their unparalleled contributions to American popular music the Funk Brothers are long overdue their moment to step out of the shadows and into the spotlight. Exhilarating, funny and moving - their story is one of triumph and tragedy, hits and heartbreak.