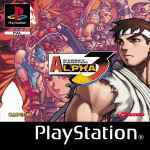 Unavailable
Sorry, this product is not currently available to order
The original is back! Before there was Tekken... there was Street Fighter. And now, the newest version is here! With incredible combos, new characters, and blazing graphics, the new Street Fighter Alpha 3 is guaranteed to please! Start getting those fingers ready!

Street Fighter Alpha 3 features various modes of arcade gameplay. The Arcade mode is a direct translation of the arcade version with added special effects during hit sequences. This mode offers truly flawless all playable characters. New to the Alpha series is the World Tour Mode, a special game mode designed for the PlayStation that allows you to select a main character to fight opponents throughout the world. Street Fighter Alpha 3 dares you to master a multitude of new moves, specials, and super combos.