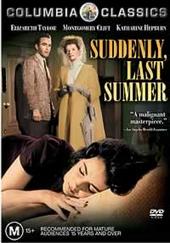 Elizabeth Taylor and Katharine Hepburn each received 1960 Oscar® nominations for Best Actress in this gripping adaptation of the Tennessee Williams play. Beautiful Catherine Holly (Elizabeth Taylor) is committed to a mental institution after witnessing the horrible death of her cousin at the hands of cannibals. Catherine's aunt, Violet Venable (Katharine Hepburn), tries to influence Dr. Cukrowicz (Montgomery Clift), a young neurosurgeon, to surgically end Catherine's hau­nting hallucinations. By utilizing injections of sodium pentothal, Dr. Cukrowicz discovers that Catherine's de­lusions are, in fact, true. He then must confront Violet about her own involvement in her son's violent de­ath.

“Suddenly, Last Summer remains a remarkably salacious descent into madness, thanks to Mankiewicz's ha­rrowing direction and two towering performances by Taylor and Hepburn”

“On film, with Taylor as the woman who saw something nasty and Clift as the psychiatrist trying to probe her trauma, the one-act material is stretched perilously thin; but it works for Hepburn as the incarnation of civilised depravity.”

“Hepburn and Taylor both earned Oscar nominations for their work; it's hard to pick which turns in a more compelling performance.”