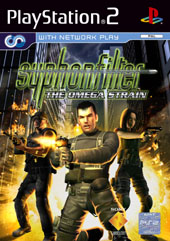 Due to COVID-19, we're unable to accept new orders at this time. Learn more...
As the latest chapter in the compelling story, Syphon Filter: The Omega Strain returns with more fast-paced intrigue and global espionage, providing players with a mind-blowing online and offline action-oriented gameplay experience. Players seeking the added challenge of using team-based strategies to bring down the global terrorist consortium will find it by joining forces with other agents online. Together, they will battle enemies in all 17 single-player missions with the exciting ability to access new areas of the environments only available while playing online. Teamwork skills are put to the test in a unique setting as players encounter obstacles that require the use of two or more players to overcome. Communication is crucial in online play and players will have the opportunity to utilize a Syphon Filter: The Omega Strain- compatible headset for PlayStation 2 for voice chat to verbally strategize with their teammates. Players also can simply use the directional pad to communicate with fellow agents to strategize their next maneuver. Rather than playing as Gabe Logan as in past iterations of the franchise, Syphon Filter: The Omega Strain draws players into the storyline more than ever before with the ability to create their own richly detailed playable game hero, including the ability to customize their agent's look, uniform and equipment. Selected as one of the chosen few to be a trained operative within Gabe Logan's reformed Agency, players must use both tactical strategy and appropriate weapons to battle the most deadly commandos in the world in 17 exhilarating missions spanning the globe from Yemen to Toronto. In Syphon Filter: The Omega Strain, gamers will be engrossed in non-stop action in single-player and online play as they exchange gun shots or fight hand-to-hand with a knife against all-new terrorists and enemies in visually-stunning international locations approximately three times larger than previous installments in the franchise. To assist gamers in taking on terrorists, Syphon Filter: The Omega Strain arms players with an arsenal of more than 100 unique weapons and gadgets and allows them to upgrade their artillery as they progress through the levels. Players must carefully plot out which weapons to use for a particular mission because they are limited to carrying four weapons at a time for a more realistic gameplay experience. Animations have been created for enhanced seamless gameplay motions, allowing players new abilities to keep enemies in target. Gamers will be able to target lock on individual body parts of their enemies for more ways to take down a hostile force. Syphon Filter: The Omega Strain's storyline begins when outbreaks of a fatal, mysterious virus erupt in such different locations as Toronto, Belarus, Uganda, and Brazil. No one seems to know where the virus originated from or how it spread. The enigmatic Mara Aramov also has escaped from a high security prison and is seen in locations all over the world. Gabe Logan suspects that Mara somehow plays a part in the outbreak of the deadly virus with the help of whoever is behind the Syphon Filter conspiracy. Put in charge of a powerful new black-box Agency, Gabe uses all of his resources in a desperate battle against the clock. He and his team battle terrorists from all over the world: Quebec, Yemen, Belarus, Myanmar and Tokyo, as they struggle to discover who mutated the original virus, and why. If a cure is not found soon, the fate of the world's population is in jeopardy.
Release date Australia
July 9th, 2004
Game Platform
Brand
Publisher
Sony Computer Entertainment
UPC
711719643241
Product ID
1460560