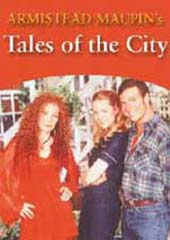 Due to COVID-19, we're unable to accept new orders at this time. Learn more...
Armistead Maupin's captivating best seller comes to life in this brilliant adaptation of the hilarious and affectionate chronicle of San Francisco life in the 1970s.

In Tales of the City, the carefree chaos revolves around a funky old apartment house at 28 Barbary Lane where the enigmatic and mysterious landlady, Anna Madrigal (Academy Award Winner, Olympia Dukakis) presides over her residents with almost maternal affection.

Tales of the City begins with the arrival of one of the Barbary Lane inhabitants, a Miss Mary Anne Singleton (Laura Linney). The naÃ¯ve young secretary from the mid-west tumbles headlong into the colourful world of San Francisco for the first time and finds new friends with whom to embark on a new life filled with new adventures. So search for your hotpants and your platforms and join in on the fun at 28 Barbary Lane.

"The City" in question is San Francisco, and the tales are novelist Armistead Maupin's, his romantic, affectionate, and spirited homage to the glory days of his hometown. Maupin's idea of SF's glory days isn't the drug-filled Summer of Love (1967), but rather the drug-filled lust-in of the late '70s. Replacing acid with coke and ludes, psychedelia for disco, this six-hour miniseries (which caused controversy for its open drug use, nudity, and direct depiction of homosexuality upon its initial airing on PBS) follows the romantic struggles and identity crises of a colorful cast of characters. The action--as addictive as the drugs the characters ingest--is seen mostly from the innocent point of view of Mary Ann, the city's newest culture-shocked resident--so its presentation is rather decadent and hedonistic. Because the story originally ran as a daily serial in the San Francisco Chronicle before being compiled into a novel, its serialized structure suffers from typical soap-opera mawkishness and the need to shock with ridiculous revelations. Thankfully, this degeneration mostly occurs during the final two hours, allowing you to just enjoy the personalities and hilarious and often-touching interactions of the richly drawn characters before they're manipulated by plot devices. The performances are all outstanding, especially Chloe Webb's spacey ex-hippie Mona, Marcus D'Amico's romantically doomed Michael, and Olympia Dukakis's Anna Madrigal, the enigmatic mother hen/landlady of many of the film's central characters. --Dave McCoy
Release date Australia
January 1st, 2000
Movie Format
DVD Region
Edition
Aspect Ratio
Language
English
Length (Minutes)
360
Stars
Studio
Vendetta Films
Supported Audio
Genre
UPC
5021456111442
Product ID
1458322