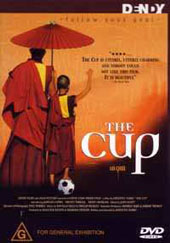 Buddhism is their philosophy. Soccer is their religion.

While the soccer World Cup is being played in France, two young Tibetan refugees arrive at a monastery/boarding school in exile in India. Its atmosphere of serene contemplation is somewhat disrupted by soccer fever, the chief instigator being a young student, the soccer enthusiast Orgyen.

Prevented by various circumstances from seeing the Cup finals on television in a nearby village, Orgyen sets out to organize the rental of a TV set for the monastery. The enterprise becomes a test of solidarity, resourcefulness and friendship for the students, while the Lama, head of the monastery, contemplates the challenges of teaching the word of Buddha in a rapidly changing world.