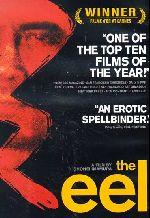 In a jealous rage, Takuro Yamashita brutally murdered his beautiful wife after catching her making love to another man. Without hesitating, he delicately covered her lifeless body and turned himself in to the local authorities.

After an eight year prison sentence, he starts a new life as a barber in a small town offering perfect isolation from his fears. The agonising pain of his wife's infidelity has left him unforgiving and without remorse. For years now, his only solace has been through an eel he kept as a pet in prison and, as of late, in a small tank at the barbershop.

As a favour to the town's priest, Takuro has reluctantly agreed to help a young woman (Keiko) with a troubled past by offering her a job as his assistant. Beautiful, sincere and uncompromisingly dedicated, it would appear that Keiko is just what Takuro needs in his life. However, when he least expects it, Keiko's past will collide with Takuro's. And, if he isn't careful, Takuro's past will come back to haunt him forever.

Eight years after his last masterpiece (Black Rain) electrified audiences, the world renowed master of quirky, slightly offbeat and audacious cinema became one of only four filmmakers to win the coveted Palme d'Or at Cannes twice.