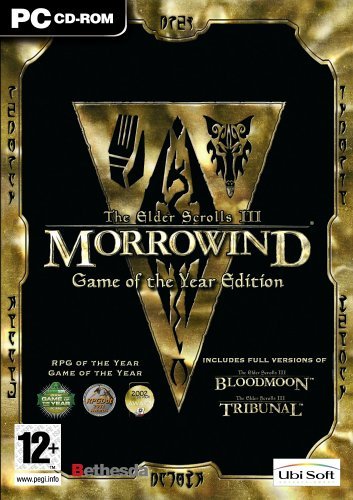 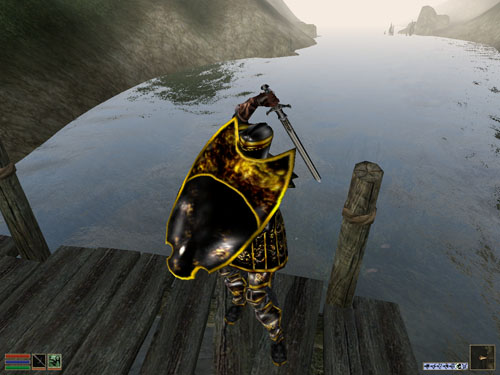 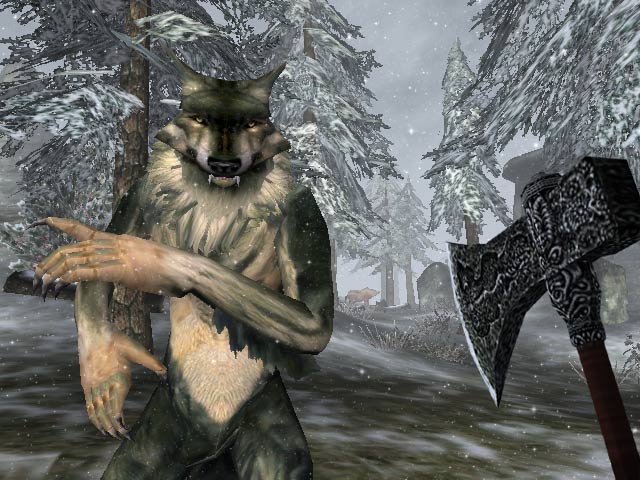 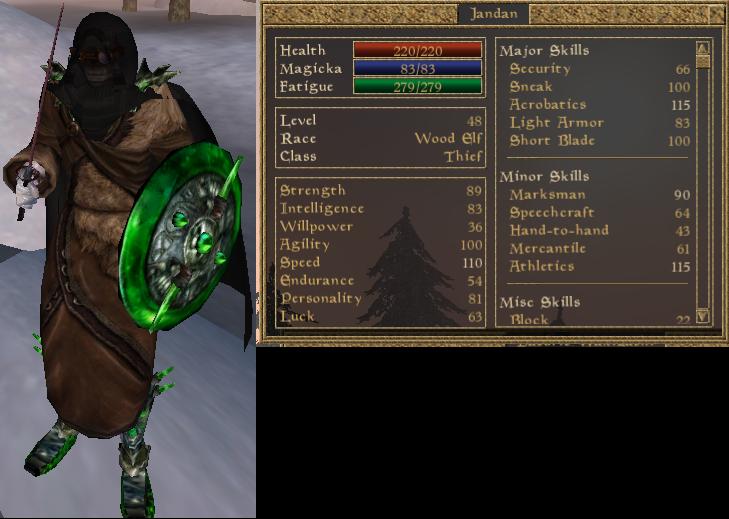 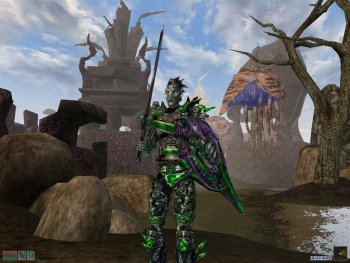 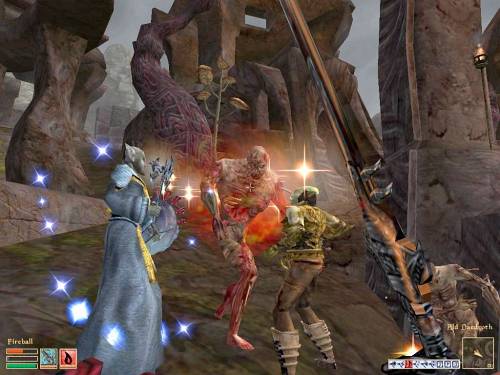 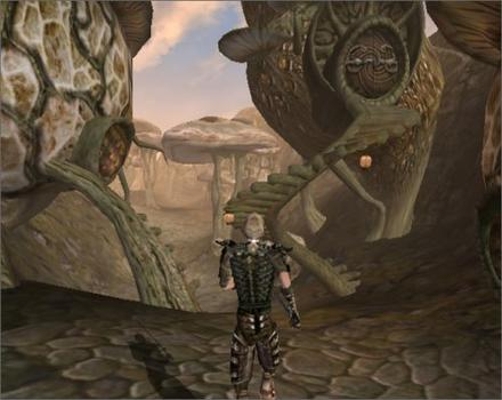 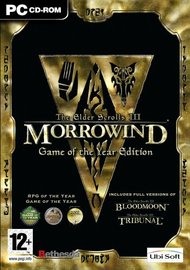 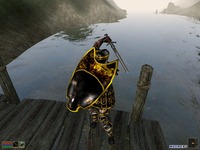 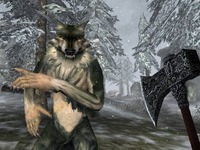 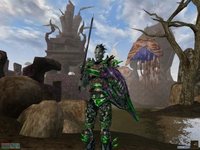 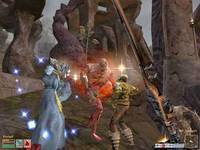 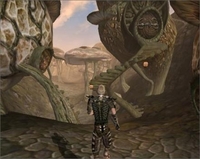 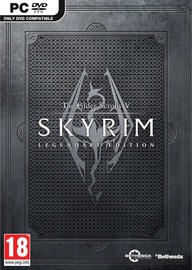 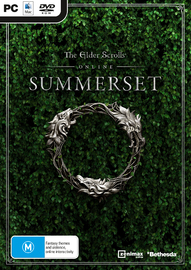 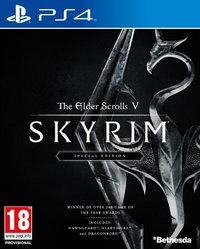 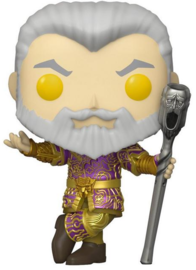 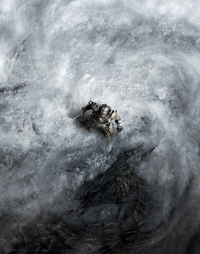 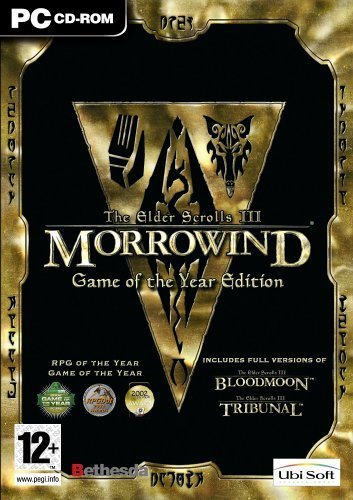 This is the true adventure game. Set in the wonderful world where Oblivion happens to be set too, this sprawling adventure will sweep you away. The world is a beautiful place with full night and day cycle. The sky is absolutely amazing to watch and you could seriously just stare at it all day… not that I have. Cough.

This game is an old masterpiece that may not have aged too beautifully but is still as immersive now as it was back then. The combat I must say is terrible but the characters, pure fun of stealing and quests are interesting and worth doing for the experience.

The game is so much deeper than Oblivion, it's sequel, which took some features from Morrowind and dumbed them down (for better or for worse I guess?), for example there are spears in Morrowind! There are separate glove and shoulder armour pieces! There are throwing stars and knives! There are more skills! And the environments are so much more varied in Morrowind than Oblivion.

This is a great game that deserves the recognition it got at release.

The good: (1) Immersive, beautiful, packed with detail, atmospheric, complete freedom. It actually outdoes Baldur's Gate II in these respects. There are at least six distinct architectural styles, corresponding to different cultures; all 3000-odd NPCs and 10,000s of placed objects are arranged by hand; there are eight fully-developed storylines that you can explore alongside or instead of the main story. (2) Atmosphere: far superior to Morrowind's suc­cessor, Oblivion. You will really feel the xenophobia of the NPCs you meet. (3) Infinite moddability. There is a mod for everything you could want. My core recommendations: Passive Healthy Wildlife; FPSOptimizer; Better Heads; Better Bodies.

Oh, and this is before you start thinking about the expansions.

The bad: it's so rich that it can be overwhelming at first. When I bought the game I played for a couple of hours and felt a bit lost. Six months later I tried again and was hooked. (2) It is buggy. Crashes-to-desktop are, alas, too common. (There are mods that can reduce this problem.) (3) In all the Elder Scrolls games, it is in the nature of the rule system that once your character reaches about level 20, there is basically nothing you can't do; the game is no longer challenging (though exploration is still fun). This is by design: you have COMPLETE freedom, to become an invulnerable overpowered demigod, if you want; but personally, I find it's most fun to start a fresh character for each storyline.

The sequel, Oblivion, is regularly cited as one of the greatest games ever created; yet many people who have gone on to replay Morrowind, for old times' sake, have found themselves much more gripped by it.

Oblivion stayed on my harddrive for about three or four months; Morrowind has never left it and probably never will.

9 out of 10 people found this review helpful.

Even after playing this multiple times over 6 years this game is STILL my favourite in my RPG collection! It is by far better than its sequel Oblivion in terms of its plot and originality of quests.

The morrowind world is HUGE! 100s of caves and shrines that house bandits provide training to hone your skills for the faction quests and the main quest, although unfortunately some cave bandit NPCs are associated with quests so if you go and kill them before you get to the quest, it ruins your chance of finishing that quest which could jeopardise future promotions in factions and such. And these bandit NPCs are indistinguishable from non-quest bandit NPCs, so it pays to finish off most of the quests before you go nuts in the bandit caves.

The best thing about this game is thae fact that you can change your fighting style and armour preferences when you reach the maximum ability in your original fighting style or armour preference. Say if you reached 100 with long blade and 100 with heavy armour, you can change your fighting style to medium blade or archery or destuction magic and your armour to medium armour or unamoured, and that way if the creatures become too easy to fight at your high ability level you can challenge yourself by using a different weapon/armour and build up that skill.

The expansions that come with GOTY edition are awesome! The change of scenery they provide is a welcome change if you have explored the main games' map many times over! Bloodmoon's Sol­steim island and Tribunal's Mou­rnhold city are so different from Morrowind's Vvar­denfell and offer many more hours of exciting gameplay.

The posibilities are endless in this game! With a huge map to explore and many skills to master, you can never be bored playing this game!

An epic, open-ended single-player RPG, Morrowind allows you to create and play any kind of character imaginable. You can choose to follow the main storyline and find the source of the evil blight that plagues the land, or set off on your own to explore strange locations and develop your character based on their actions throughout the game. Featuring stunning 3D graphics, open-ended gameplay, and an incredible level of detail and interactivity, Morrowind offers a gameplay experience like no other.

This will allow gamers to continue their existing games of Morrowind and experience the new quests and areas offered by the expansions, while players who have never played the Best RPG of 2002 can experience Morrowind for the first time with all of the added content.

In Tribunal, you journey to the capital city of Morrowind, called Mournhold, to meet the other two god-kings of Morrowind, Almalexia and Sotha Sil. Your journey will lead you to the Clockwork City of Sotha Sil and massive, epic-sized dungeons, where strange and deadly creatures await you, including goblins, lich lords, and the mysterious Fabricants.

Bloodmoon takes you to the frozen Island of Solstheim where you'll experience snow, blizzards, and new creatures, including frost trolls, ice minions, and wolves…just to name a few. You'll have a choice of stories to follow and have the opportunity to defend the colony, take control over how the colony is built up, and eliminate the werewolves. Or, you can decide to join the werewolves and become one of them, opening up a whole new style of gameplay.