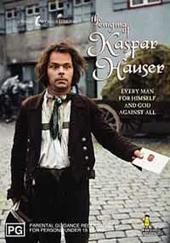 Unavailable
Sorry, this product is not currently available to order
In 1828, as if out of nowhere, a young man appeared in Nuremberg's town square. He had no history, spoke only a few words, and could not stand upright. Having been locked in a basement for 17 years, Kaspar Hauser was more beast than man. Who was he, and where did he come from? Despite attempts by townsfolk to understand and civilize him, Kaspar became little more than a sideshow attraction. And though the mystery of his origins remained unanswered, perhaps the biggest question of all was, why did someone want him dead? Based on a true story, Werner Herzog's poignant, often funny, and unforgettable tale of "the enigma pf the century" -punctuated by a brilliant performance by Bruno S. will haunt viewers forever.