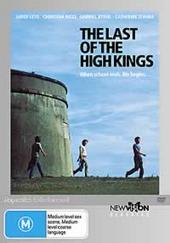 It is 1977, Dublin rocks to the music of Thin Lizzy and the world is stunned by the death of Elvis Presley. Frankie (Leto), caught between acne and adulthood, has just completed his final exams in school. Convinced he will fail, he survives the summer organising a beach party, having lustful thoughts about two girls he believes are unobtainable and fending off the advances from a visiting American family friend, all whilst coping with his oddball family. Featuring music by Thin Lizzy, Mink De Ville and Motte The Hoople.