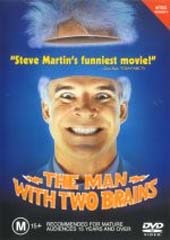 I tnink this movie is absolutely fantastic if you have any kind of sense of humour, there's something funny happening every few seconds. everything is funny even after you've seen it over 50 times as i have in the past. the only movie that comes close to being as funny as this one has to be Dirty Rotten Scoundrels, where steve martin is exceptional as rupret .

Very Very slow storyline took over half the film for the story to develop with a few laughs not one of steve martins best!!!

The Man with Two Brains

Anyone who doesn't think Steve Martin is one of the funniest fellows on the planet should have his head examined. As The Man With Two Brains, madman Martin is just the guy to do it, playing Dr. Michael Hfuhruhurr, famed originator of ziplock, screw top brain surgery. The good doctor pines for his late wife – but slinky siren Dolores Benedict (Kathleen Turner) sashasy into his life and changes all that.

They're soon married but the truth quickly emerges: Dolores' beauty hides a calculating heart of stone. The situation is hopeless – until another brain specialist's od­dball research offers a bizarre ray of hope. Anyone with half a brain will rejoice in the sheer lunacy of this bulimely silly farce, directed and co-written by frequent Martin collaborator Carl Reiner.