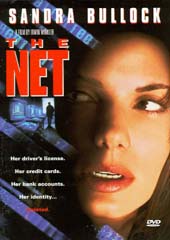 In this gripping techno-thriller, Sandra Bullock (star of Speed and While You Were Sleeping) stars as computer analyst Angela Bennett, who stumbles onto a program she was never meant to see. Now she's caught in The Net- targeted by a mysterious organisation who will stop at nothing to protect its deadly secret.