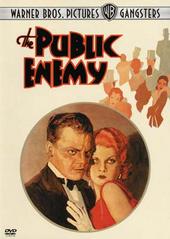 Showcasing James Cagney's powerful 1931 breakthrough performance as streetwise tough guy Tom Powers, but only because production chief Darryl F. Zanuck made a late casting change. When shooting began, Cagney had a secondary role but Zanuck soon spotted Cagney's screen dominance and gave him the star part. From that moment, an indelible genre classic and an enduring star career were both born. Bristling with style, dialogue and desperation under the masterful directorial eye of William A. Wellman, this is a virtual time capsule of the Prohibition era: taut, gritty and hard-hitting. Contains several restored scenes (deleted from subsequent reissue versions due to enforcement of the Production code) from the original release version of the film, unseen since 1931.